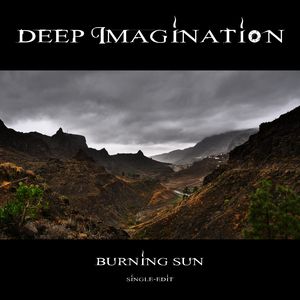 The 4:36 minute version of the long track, which was featured as the opener on the Empire Music Magazine CD sampler, is released as always on BSC Music/Prudence.

"Burning Sun (Single Edit)" marks the end of the releases around the current album.

Before launching into new spheres, DEEP IMAGINATION founder Thorsten Sudler-Mainz also takes a musical look back at the progressive styles he has produced and celebrated many times over the past 25 years, also with his project Art Of Infinity.

The epic progressive-ambient longtrack "Burning Sun" from DEEP IMAGINATION's album "My Silent Celebration" tells the story of a man who realised too late that he cannot exploit the earth without consequences.

The idea for "Burning Sun (Single Edit)" came up during a hike in the mountains of Cran Canaria. On the cover, you can see the "Presa de Soria" reservoir, which lies in a spectacular landscape and has almost dried up as a result of climate change.

With this title, which is characterised by the virtuoso playing of guest guitarist Günter Kaufmann and the joint vocals with partner Ann Kareen Mainz, DEEP IMAGINATION founder Thorsten Sudler-Mainz also musically takes another look back at the progressive styles he has produced and celebrated many times over the past 25 years. (BSC Music/Prudence)