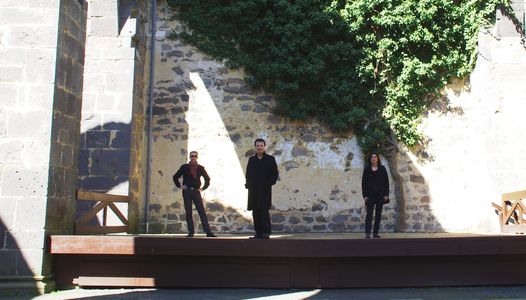 "My strongest musical influences have been Pink Floyd and Dead Can Dance”.

Thorsten Sudler-Mainz talks about musical influences and the making of his new album "Carefully Kept Secrets". He gives insights into the work in the studio and collaborations with guest musicians like Günter Kaufmann and Byron Metcalf.

"My strongest musical influences have been Pink Floyd and Dead Can Dance”.

Once again I hold a small but simultaneously great jewel in my hands. Those who appreciate the sounds of Enigma, Dead Can Dance, Clannad, Era, Pink Floyd and such can't ignore Deep Imagination. I’ve been following the project by Thorsten Sudler-Mainz a long time. The wonderfully produced and mostly cosmic sounding releases I have joyfully experienced. The new release "Carefully Kept Secrets", is no exception: spherical ambient sounds, interspersed with subtle percussion, airy otherworldly vocals, as well as tight art rock elements and occasional guitar highlights. So now over to Thorsten, let's hear how his project came to life, what's next up for him, he has a lot to tell us for sure.

Hi Thorsten, to begin with I’d like to know what initially sparked the project - Deep Imagination, when did you start your electronic music career and where do you draw your inspiration and motivation from?

Hi Sven, when I started my solo project with Deep Imagination in 2005 it was, to begin with, an instrumental project on the side where I had the possibility to play live. Since 2012 my other project, Art Of Infinity, has fallen into a beauty sleep and so Deep Imagination has become my main focus, which has made me really pleased. Mostly because I now have complete control about the production, this has led me to being almost hundred percent satisfied with my new album, "Carefully Kept Secrets". I first came to electronic music back in 1996 when I purchased a Kurzweil K2000. The fascination to make atmospheric music with synthesizers has held me captive ever since. My inspiration is to create music which I love and to be able to express myself artistically. This creates the motivation to get to grips with a piece of work, like an album, and be able to see it through to completion.

Has your personal music orientation and the electronic sounds - due to new technology - developed further, what does your production environment look like today?

Like most other musicians I was deeply influenced by the music of my childhood and youth. I was born in 1963 and my musical roots lie in the music of the sixties, seventies, eighties and nineties. That doesn't mean that I haven't discovered anything new since then, and of course the approach and way of making music has changed dramatically since 1982, partially due to technical advances. I began with a drum kit, later came guitar, then vocals and then of course electronic instruments like keyboards and computer.

Art Of Infinity is my project with Thorsten Rentsch and together we produced four very complex albums. Now, with Deep Imagination, all of these experiences come together and my work benefits from this: even if I haven't become a virtuosi in any one instrument. My studio has evolved over the years and of course today's technology and software helps immensely. Principally one needs only sound sources, microphones and recording tracks and the crucial elements in the final result are the ideas, creativity and decision making.

Explain to the readers the concept of one Deep Imagination album of your choice, preferably in light of the release "Carefully Kept Secrets”.

For "Carefully Kept Secrets" I have developed a more open concept which has allowed a lot of my previous musical experiences to flow in. It's my first solo album, where I have implemented dominantly electronic ambient components but also chants, guitars and live percussion. I have made three instrumental albums with Deep Imagination so far but I’m no electronic musician in the classical sense. I have probably been influenced musically the most by bands like Pink Floyd or Dead Can Dance. I guess one can hear that in the latest album. The themes in "Carefully Kept Secrets" revolve around dreams and the keeping of secrets but also about the search for solutions that each must discover for oneself and the resulting lessons learnt. It deals with the acknowledgement that to reach ones own aims one must depend on ones self and not on somebody else. There's actually quite a lot of my own narrative in there.

How much time was invested in this great album and how did the conception process and studio time unfold?

There was a momentum with the latest album which actually surprised me. I think that lay, in part, to the wonderful guest musicians I had; my wife the singer Ann Kareen Mainz, percussionist Byron Metcalf and most  of all to guitarist Günter Kaufmann. His dreamlike Floydian guitar playing was exactly the art rock component which I wanted. Günter lives in my vicinity and I knew him from just one session where we played together back in the eighties and then suddenly we met up again in 2012 at a concert of Art Of Infinity in the Bochum Planetarium. Two years later he came to my studio for the first time, he played on one of my basic tracks and then there was this stunning magic in the room. Regardless wether he’s playing the Stratocaster, the Telecaster or an acoustic guitar: he's got an amazing sound. Unlike my previous albums, "Carefully Kept Secrets" has many improvised live passages which were recorded in the studio and I picked out the best to make the arrangements. Producing the guitars and many of my keyboard parts myself has lent a certain amount of soul to the album. Composing the vocals and choir parts with my three singers has been really enjoyable.

That Byron Metcalf agreed to contribute percussion to Deep Imagination just about nailed it for me. The basic tracks I sent him to his studio in Arizona and what fantastic things he recorded has actually inspired me further with the development of the songs. When you listen to him playing on the title song and the track "Wings To Fly", which has become my favorite of the new production, you can hear right away, that it's him. He's a very famous and unique musician and I'm very proud to have his grooves down on my new album. The final mix of "Carefully Kept Secrets“ was made by Thorsten Rentsch in the Renaissance Studio Cologne. I’m incredibly grateful to him, my label manager Christoph Bühring-Uhle at BSC Music and all of those who have contributed and were involved.

What’s your opinion of music videos - are there advantages in this audio visual world to create clips for Youtube or other channels?

That’s a theme that I find increasingly interesting. A video is almost like a stage, since the listener can see here the people who stand for the music, which makes the whole thing somehow exciting. It's been a goal of mine for a long time now to produce a video where the musicians perform and act a little, a bit like in the sixties with The Beatles. It was wonderful that Ann Kareen and Günter participated and that Oda Reiter from Wortwind, who also does vocals on the new album, filmed and was involved in the production. Currently I’m working on some concepts for more of the tracks from the new album, for sure "Wings To Fly" is in there and I want it to get a little more intricate but I don't want to reveal too much.

Is there a lot of experimentation and trying out in the studio, what is especially important when you check out a new synthesizer?

Many things just happen intuitively. When I produce an album then I look at the polyphonic sound selection I have, regardless wether they stem from hardware or a software-synthesizer. A sound must be inspiring and by playing something must happen that I want to keep the recording and work on it. Sometimes I reject whole parts or change an arrangement radically until the composition from start to finish pleases me. This can be a prolonged process. If I want a certain sound, then I search as long as it takes or create one to fit. With other sounds I know right away which sound I want to implement into which idea.

Experimenting with effects like delays and so on, can really make some surprising and interesting tones which even in the final mix can give some really wonderful additions. I also love to add the occasional gong, cymbals or perhaps distorted Fender bass, tearing the strings up and down with a plectrum, now and then adding backward sounding effects. I have told myself that if I want to have a breathing piece of production then it's no good to rely only on the keyboards.

Where are your favourite venues and in which Planetarium would be the perfect location for your sound?

Your question contains the answer. I played twice in the Bochum Planetarium and that's a real favourite. Deep Imagination had a concert at the venue Movie in Bielefeld at the Electronic Circus Festival and a show at the Satzvey Castle Festival: both really wonderful memories. Atmospheric music concerts benefit enormously from a magical location. The concerts I just mentioned are now a few years ago and at the moment there are no live shows planned. Let's see what happens…

And now we near the end, let's look forward: what do you still want to reach musically, soundtracks for film and the like must be an attractive diversion in your field?

It makes me really happy when someone uses my music in film or documentaries. The television channels ZDF, Arte and HR have already used pieces by me but composing film soundtracks isn't my goal. Whatever it is that I haven't reached musically I don't think about it. I’m simply really happy that since 2004 I have managed to have my music released by BSC Music which is a great label. Regarding the type of release: maybe the occasional one track release is interesting but in the end I think the album format is irreplaceable. For me to bring out an album is, I think, how it is for an author to publish a novel. To make a coherent album is, in the end, from an artistic point of view the most beautiful thing to do.

We recommend the video of song „Carefully Kept Secrets“!

The interview in German language: